Does an employer have to provide an alternative position or reassignment as a reasonable accommodation? 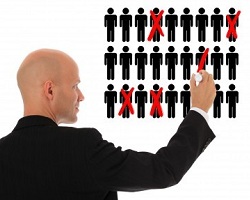 When an employee cannot physically perform the essential function of their position, but can perform light sedentary work, an employer needs to consider providing an alternative position to the employee or at least consider placement in a sedentary position in another department, as a reasonable accommodation.  For example, in Godfrey v. Globe Newspaper Company, Inc., 928 NE 2d 327 (2010) the Plaintiff requested to be provided an alternate position that accommodated his physical disability.  The Court held that if the employer had a policy of putting injured employees in a light duty positon, then they had an obligation to do the same for the Plaintiff.

The American’s with Disabilities Act (“ADA”), specifically declares that “reasonable accommodation” “may include … reassignment to a vacant position.” 42 U.S.C. § 12111(9)(B).  Similarly, an employer must allow employees to transfer locations or work sites within the same job category.” Hurley-Bardige v. Brown, 900 F.Supp. 567, 571 (D.Mass.1995). Under the ADA, it is unlawful to “discriminate against a qualified individual on the basis of disability in regard to … discharge of employees….” Discrimination consists of “not making reasonable accommodations to the known physical … limitations of an otherwise qualified individual with a disability who is an … employee ….” 42 U.S.C. § 12112(b)(5)(A)  As the ADA states, “[t]he term `reasonable accommodations’ may include … (B) … reassignment to a vacant position.” The ADA, thus, may consider failure to reassign a qualified individual to a vacant position as a form of discrimination, Furtado v. Standard Parking Corporation, et al, 820 F.Supp.2d at 278 (D.Mass. 2011).

It should be noted that The Equal Employment Opportunity Commission (“EEOC”) states that reassignment for purposes of a reasonable accommodation, means that a qualified employee automatically receives the vacant position: “Otherwise, reassignment would be of little value and would not be implemented as Congress intended.” Equal Emp’t Opportunity Comm’n, No. 915-002.  It should also be noted that many circuits have adopted this reasoning, see Smith v. Midland Brake, Inc., 180 F.3d 1154, 1166-67 (10th Cir. 1999) (en banc), which appears in line with Supreme Court precedent. See U.S. Airways v. Barnett, 535 U.S. 391, 397 (2002) The Act requires preferences in the form of `reasonable accommodations’ that are needed for those with disabilities to obtain the same workplace opportunities that those without disabilities automatically enjoy.  Even in our own district, Courts have noted that a “[r]easonable accommodation may include reassignment to a vacant position, Phelps v. Optima Health, Inc., 251 F. 3d 21 – Court of Appeals, 1st Circuit 2001

In addition, if an employer has in the past utilized a policy of assigning to sedentary positions injured employees who, were unable to perform the more physically demanding work of their former positions, and if, such a policy did not create an undue hardship for the employer, the employer would be required to apply that policy to the plaintiff. See Lolos v. Solutia, Inc., 193 F. Supp.2d 364, 371-372 (D. Mass. 2002).